It is with great pleasure I report on the activities of Taverners Australia this year.

Our Patron, His Excellency General The Hon David Hurley AC DSC (Retd) continued the active support of The Taverners, commenced by his predecessor Sir Peter Cosgrove. The Taverners were invited to participate in an open day at Government House and were featured in a social media campaign by the Governor, promoting the impact of kindness in the community. The Taverners promoted blind cricket and Ray Moxley. We were also invited to a Christmas function thanking all patronages for their work and support to the community. We thank the Governor for his support and active participation of The Taverners.

The Taverners branding, commenced 18 months ago and has now become pretty much entrenched within branches. The final updates are now to flow through to a revamped web page, social media structure and closeout merchandise and communication protocols. I thank Sunny Drury for his tenacity and drive to shepherd us through these seemingly endless paths of frustration. But the end results are well worthwhile, and we have a contemporary and slick image to drive us into the next phase of our growth.

The Tavs Foundation is now in its second year and is having considerable success as a tier 1 charity. It is clear the work the Taverners do and the ability to provide a tax deductable receipt for donations over $2 does have the attention of our followers and supporters.

Our agreement with Cricket Australia (CA), naming The Lord’s Taverners Australia as cricket’s official community partner has continued. The partnership is actioned through “The Sporting Chance Fund” with the aim of raising significant funding to grow programs and initiatives focused on the engagement of girls and women; multicultural communities; indigenous Australians and people with a disability. We thank Cricket Australia for their continued support and assistance as we grow the awareness of the fund and continue to raise funds. I thank Cricket Australia for their support and Chairman Earl Eddings who became a member for life during the year. It is interesting to record the active support the Chairman has given us, and exemplified whilst he was at The Lord’s Test in August when he sent me a text message asking for as many Taverner cricket bat lapel pins that I could muster. He wished to present them to his official guests at the official Cricket Australia function. All present were notable, but former Prime Minister Mr John Howard and his wife Jannette were especially pleased to receive badges and wore them proudly all day.

The Taverners was again granted permission to raise funds at The Adelaide Test in late 2019. We sincerely thank
Cricket Australia who support our work and raise funds to inject back into the community. The work of Belinda Clark, Kieran McMillan, Adam Cassidy, Aaron Dragwidge and Phil Smith is really appreciated, and I thank them for their guidance, support, and friendship.

The conference highlight was a facilitated session by Chris Bulford (a Geelong Branch Taverner) who guided the group through various scenarios and brought together 4 key action items. These have progressed well, but the introduction of a pandemic was not considered at the time, and so progress has slowed since April. 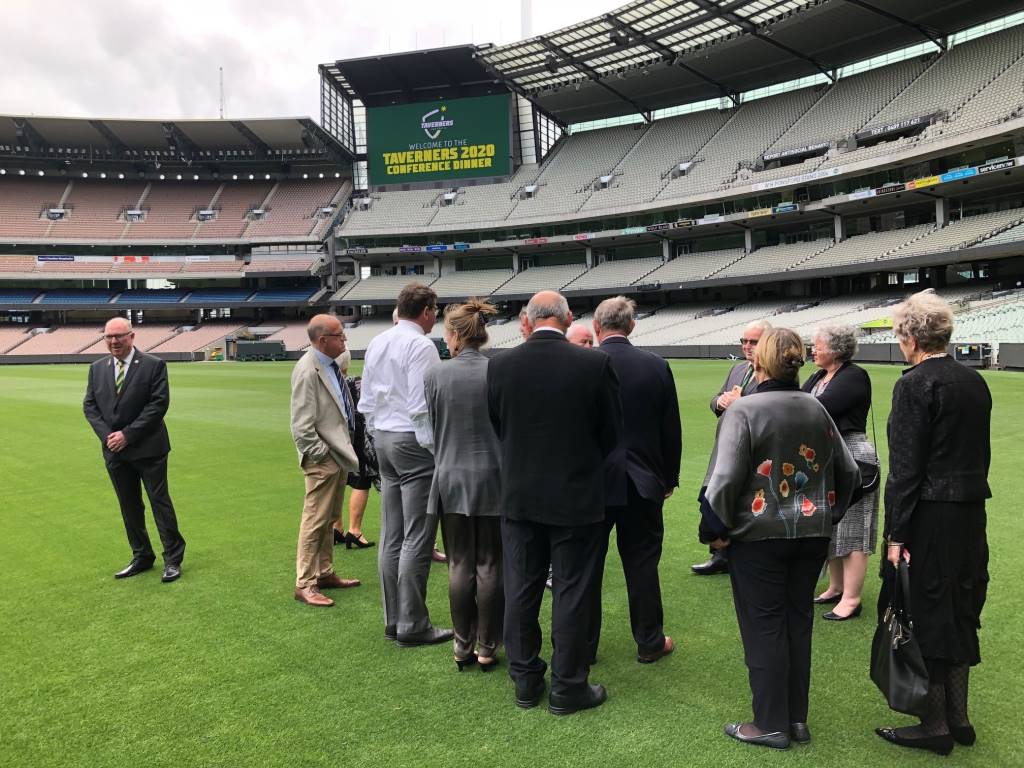 Adam Gilchrist as our Ambassador has also worked tirelessly supporting many events and giving generously of his time throughout the year. We thank Adam for this support which has been well above that which he promised.

The NCIC Carnival was again held in Geelong and the Taverners supported with a donation of $100,000, lifting our total support to $340,000 over the last four years.

Australia wide, we supported over 72 groups during the year and donated over $400,000. Our support to grass roots blind, deaf, intellectually impaired, indigenous, and young women provides opportunities and support that is greatly appreciated by them.

The Taverners has donated in excess of $10 million dollars to the community over the past 15 years to give a sporting chance to those we support.

The Lord’s Taverners Indigenous Cricketer of the year was awarded to D’Arcy Short.

We received substantial support from, APT travel, The Parncutt Family Foundation, Kookaburra, Perks Accountants, Minter Ellison, Morgan Foundation, and many individuals through generous donations and I thank them for this generous support.

The annual raffle raised almost $90,000 and this takes the total proceeds well past one million dollars. We also completed the sale of 500 dozen cases of McLaren Vale shiraz making $25,000 for Taverner branches. Our thanks to Geoff Merrill for his support and guidance to make this happen.

I would like to thank Paul Sheahan, our President, Michael Martin our Secretary / Treasurer, and Sunny Drury, National Marketing Manager for the significant support and time they have afforded me this year, as we build to a very significant position of strength and grow our brand around Australia. We do not pay staff and the considerable hours donated by these gentlemen is substantial.

To all members of The Taverners around Australia, and in particular, the Chairmen, Presidents and Committee members of all branches, I thank you for the sustained support and commitment you show as volunteers, to this great organisation and to me as National Chairman.

I invite everyone interested in cricket to get on board and join us on this exciting journey as we continue giving a sporting chance. The Taverners is committed to this vision and determined to do more to assist in future years.

Finally as we adjust to the awkward and frightening issue that is a world-wide corona virus, I ask all members to stay safe, look after each other and lets all come out on the other side stronger and healthy to return to our work with the Taverners.