We all watched Scott Boland’s dreams come true in the Boxing Day Test. But did you know Scott was awarded the Taverners Australia Indigenous Player of the Year Award in 2019, and now for a second time in June 2021?

Boland was part of the Aboriginal XI that traveled to the United Kingdom to commemorate the 150th anniversary of the first international cricket tour by a team from Australia in 1868.

“Scott had a great year and thoroughly deserves the recognition for his performances in the Sheffield Shield and with the men’s Aboriginal XI on their 150-year commemorative tour of the UK,” CA interim executive general manager team performance Belinda Clark said.

“Scott played an important role with the Aboriginal XI, his performances crucial in his sides’ wins over the MCC, Derbyshire, Nottinghamshire and Surrey. He is a terrific athlete and wonderful role model to young indigenous kids.”

Melbourne-born and Victorian player Boland also claimed this year’s Sheffield Shield Player of the Season Award with 15 votes, ahead of Harris, Maddinson and Wade (14 votes). In nine Shield appearances, Boland took 45 wickets at an average of 19.8. Scott also featured in Victoria’s JLT One-Day Cup win and Melbourne Stars’ run to the BBL final. 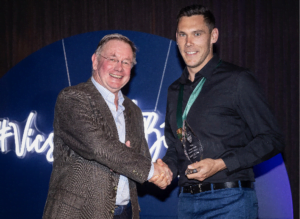